The State of the Shipping Container Market 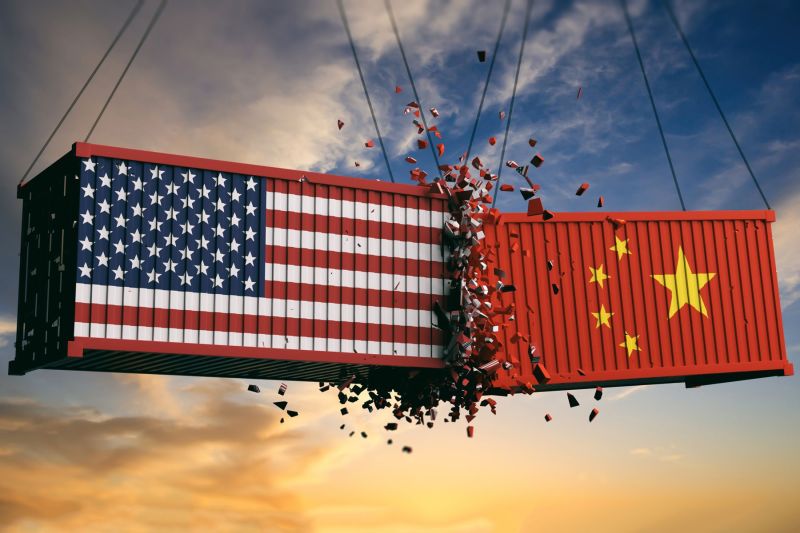 What is going on in ocean shipping?

In 2020, lockdown measures and other impacts of COVID-19 suddenly cut the demand for containerized goods. April and May 2020 were the worst months: by the end of May 2020, a record 12 per cent of global container capacity was idle or inactive – 2.7 million TEUs. Liner shipping companies responded with measures to mitigate costs, manage capacity and sustain freight rates. By the second half of 2020, the situation had reversed, but this sudden boost in demand stumbled into limited capacity and congested ports. 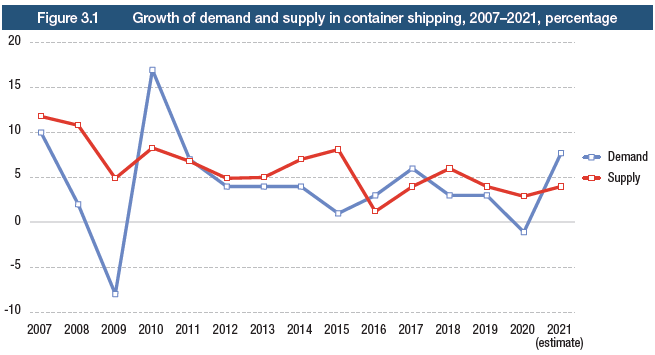 In the second half of 2020, demand for container shipping started to pick up and absorb spare capacity. Vessel supply capacity remained limited but idle container shipping capacity levels started to decline in line with growing demand as trade continued to recover. By the end of June 2020, idling was 9 per cent, but by July this proportion had fallen to 6 per cent, and by August to 4 per cent. By the end of September 2020, it was down to 3.5 per cent (going below the 4.1 per cent average level of idling for full year 2019). In 2020, global container fleet capacity expanded by almost 3 per cent, to 281,784,000 dwt, while container trade contracted by 1.1 per cent to 149 million TEU

In an effort to maintain freight rates during the period of lower demand, carriers restricted capacity. Then as demand picked up, they released more capacity but by that time the supply was being constrained by other factors, notably port congestion and equipment shortages which kept vessels waiting, especially in West Coast North America

Freight rates also escalated on the China-United States trade lane, and, faced with backlogs and longer waiting times, shipping lines have also been adding extra fees and surcharges. In the last quarter of 2020, on the Shanghai-West Coast North America route capacity expanded by 5 per cent and in the first quarter of 2021 by a further 7%. Nevertheless, the SCFI spot rate reached around $4,500/ forty-foot equivalent unit (FEU) in April 2021, compared to $1,600/FEU in April 2020, and climbed further to $5,200/FEU in July 2021. The trend was similar on routes from Asia to the East Coast. In the first six months of 2021, SCFI spot rates on the Shanghai-East Coast North America route more than doubled


The surge in spot freight rates also extended across developing regions, including South America and Africa. On the China to South America (Santos) route the rate had been $959/TEU in July 2020 but by the end of July 2021 had reached $9,720/TEU. Over the same period, rates on the Shanghai to West Africa (Lagos) route increased from $2,672/TEU to $8,102/TEU. There was also a surge in rates from China to the Arab region. Box 3.1 provides further information on the impact of COVID-19 on maritime freight in the Arab region

Since late 2020, shipping costs have increased in part because of a shortage of containers. Containers are shipped full from export-oriented locations, notably in Asia, and many usually return empty. As Asia slowly began to recover, other countries remained under national lockdown and restriction so the importing countries could not return containers. The resulting shortage of empty containers was exacerbated as carriers introduced blank sailings where empty containers were left behind and failed to be repositioned. These impediments led to higher container dwell times at ports, and empty containers not returning to the system where they were most needed. This increased shipping costs as shippers were reported to be paying premium rates to get containers back, in addition to surcharges arising from port congestion and delays, including delays in returning equipment. With containers scarce and ports suffering from congestion, shippers, freight forwarders, and importers were charged increasingly higher demurrage and detention fees. Between 2020 and 2021, across the world’s 20 biggest ports, the average demurrage and detention charge doubled – equivalent to $666 for each container

Should I trade spot or fix price for long term?

An important part of containerized trade is carried out at confidential contract rates negotiated between shippers and shipping lines. These rates are influenced by prevailing market conditions so in 2021 when spot rates were high, contract rates were correspondingly high and some were negotiated quickly to secure deals. Shipping lines typically gave priority to larger and more established shippers – leaving out smaller ones who were often unable to renegotiate. For their part, shippers aiming to hedge against future increases and uncertainties were increasingly seeking multi-year contracts. In 2021, many shippers signed trans-Pacific volume contracts for between $2,000/FEU and $3,000/FEU, far higher than previous rates on the same routes. See also table 3.1 on contract freight rates which includes all surcharges including terminal handling charges. 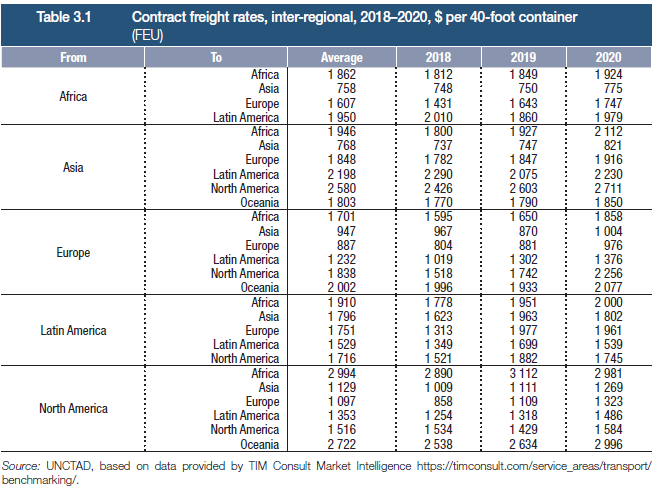 Who is benefiting in this scenario?

High freight rates have boosted the profits of global container shipping companies. In the first quarter of 2020 their operating profits – earnings before interest and tax – were $1.6 billion, but in the same quarter of 2021 reached $27.1 billion. In 2020 the full-year profit of these carriers was around $25.4 billion, but 2021 it is likely to be an unprecedent $100 billion (Drewry, 2021). And this at a time of pandemic-related disruptions, congestion at ports and a persistent shortage of containers.

Increased earnings have encouraged carrier to order new ships. At the beginning of 2021 the orderbook for container ships was similar to that in 2018. As noted in chapter 2, the surge in new orders was also prompted by low prices for new, larger vessels and by the availability of ship financing. Following the 2008–2009 financial crisis there was a similar rush in orders such that the container ship order book represented about 60 per cent of the global fleet, and new vessels started entering the market only a year after the crisis, leading to overcapacity and low freight rates. This is unlikely to happen now. Indeed the new ships are still unlikely to meet the demand. In recent years, shipping companies were faced with low earnings and uncertainties about complying with new IMO emission requirements, so had postponed placing orders. As it usually takes two to three years between the placement of vessel orders and delivery, the supply-demand imbalance is unlikely to be resolved in the short term so rates should remain high. Indeed even the arrival of new ships may not be enough to reduce and stabilize container freight rates. Global freight rates will remain high until shipping supply-chain disruptions are unblocked and back to normal, and port constraints and terminal efficiencies are tackled (Hellenic Shipping News, 2021a). This would entail investing in new solutions, including infrastructure, freight technology and digitalization, and trade facilitation measures. Moreover, even when they have new capacity, container lines faced with prolonged port congestion and closures may take capacity out of the system – keeping freight rates high. It can be argued that port congestion on the United States West Coast was initially caused by carriers responding to increased demand by inserting more capacity – but ports were then unable to handle the resulting surge. Moreover, despite recent improvements, overall port performance remains the lowest it has been in ten years of records. All the above suggests that high freight rates may be sustained in both short and medium terms. This could have lasting effects on trade and global supply chains. By end of 2020 and early 2021, Europe was facing shortages of consumer goods imported from Asia – from home furnishings, bicycles and sports to children’s toys and dried fruits. Some companies have stopped exporting to certain locations while others have been looking to shorten their supply chains by looking for goods or raw materials from nearer locations. Another example is Viet Nam’s exports of pepper. According to the Viet Nam Pepper Association, higher logistics costs have resulted in a loss of export markets. In 2020, for exports to the United States, the cost per 40-foot container was $2,000 to $3,000 but in the first six months of 2021 this had soared to an average $13,500. For exports to the European Union there was a corresponding increase, from $800-1,200 to $11,000. This caused importers to switch to pepper from Brazil; for the United States the shipping cost is only a third of that from Viet Nam and for the European Union only one tenth (Vietnamplus, 2021). Shipping cost escalation, if sustained, would not only affect exports and imports, as well as production and consumer prices, but also the prospects for short- and medium-term economic recovery. A number of governments are worried about this, including China, Republic of Korea, United States, and Viet Nam, and have raised concerns about the shipping companies.2 In China, faced with record highs in September 2020, the authorities had put pressure on carriers on the Transpacific routes for both pricing and capacity management and there were suggestions of setting a ceiling. In the Republic of Korea, to ensure that small and mid-sized shippers have access to capacity the government has announced a plan to subsidize shipping rates – a 20 per cent discount on freight rates and guaranteed shipping space if they sign long-term service contracts with domestic shipping lines.

Who is losing in this shipping crisis?

Containers offer efficient shipping services for a wide range of consumer and industrial commodities, including meats, beverages, textiles, and computers and by 2020 accounted for 17 per cent of the total volume of seaborne trade.3 So, a surge in container freight rates will add to production costs which can feed through to consumer prices. This can slow national economies, particularly the structurally weak ones such as SIDS, LDCs, and landlocked developing countries (LLDCs) – whose consumption and production patterns are highly trade dependent. In 2019, for LDCs and LLDCs, merchandise imports made up 24 per cent of GDP, and for SIDS 58 per cent – compared with the global average of 21 per cent.

Higher freight rates have a greater impact on the consumer prices of some goods than others, notably those which are more highly integrated into global supply chains, such as computers, and electronic and optical products 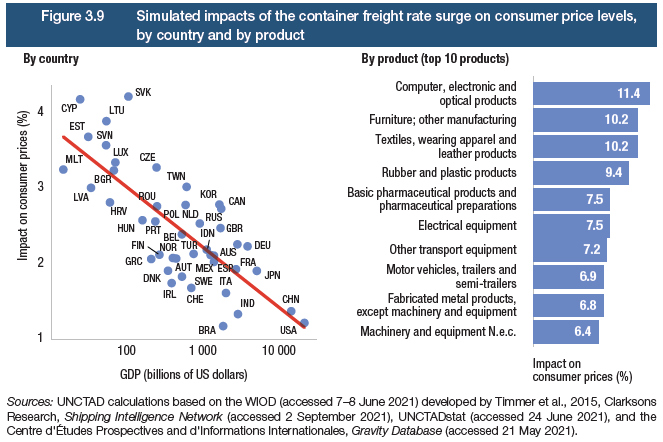 intermediate products are more strongly embedded in global supply chains than consumer products. These include raw materials, parts and components, and services used in production processes, such as banking and consultancy. For the dataset in the simulation, imported goods account for 14.6 per cent of total intermediate products used in domestic production processes, compared with 9.0 per cent for consumption products. The impact is naturally lower for locally produced or assembled goods. Their production costs include not only the costs of intermediate products but also local value-added components such as labour. In the dataset used for the present simulation, globally these production factors account on average for 46 per cent of production costs. However, if the increase in prices triggers wage increases, this would increase the costs beyond those simulated. Sustained increases in freight rates will cause greater increases in production costs in smaller economies and thus undermine their comparative advantages. Smaller countries will also find it more difficult to move up the value chain if they face higher costs of importing high-technology machinery and industrial materials. This will hamper their efforts to achieve the Sustainable Development Goals. 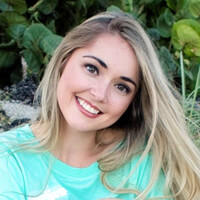 The lack of infrastructure in choke points is abismal China!! 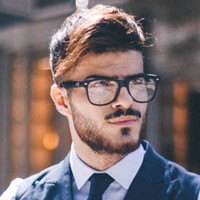 Great point, but I think the worst is over 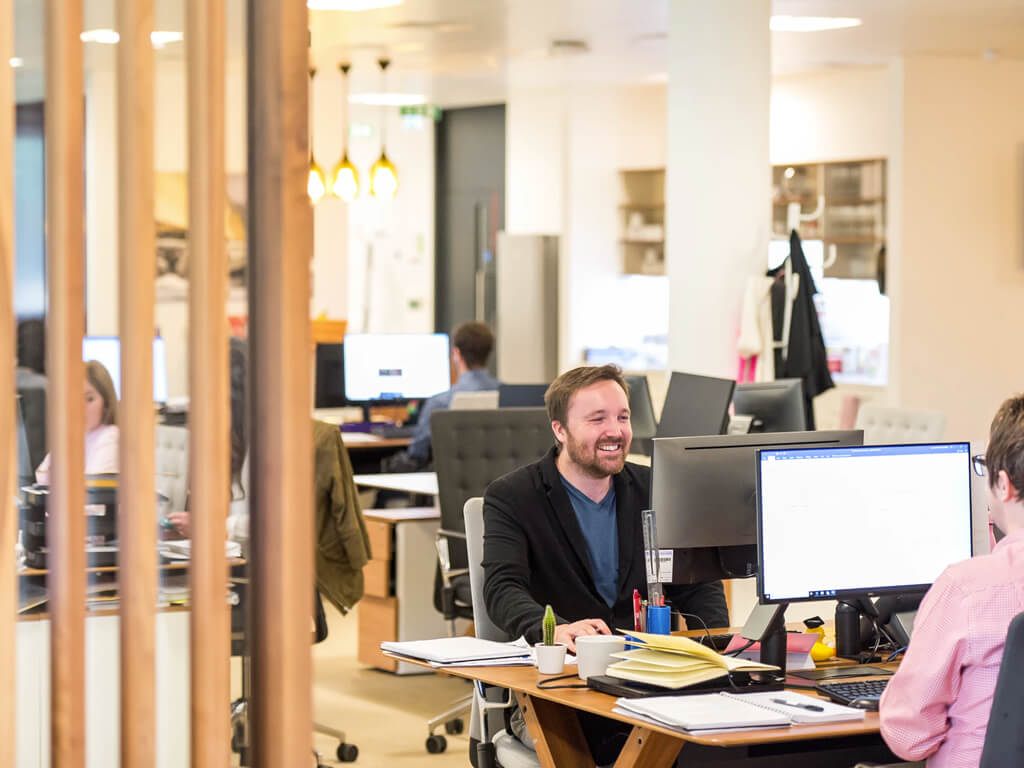 How to avoid high shipping rates 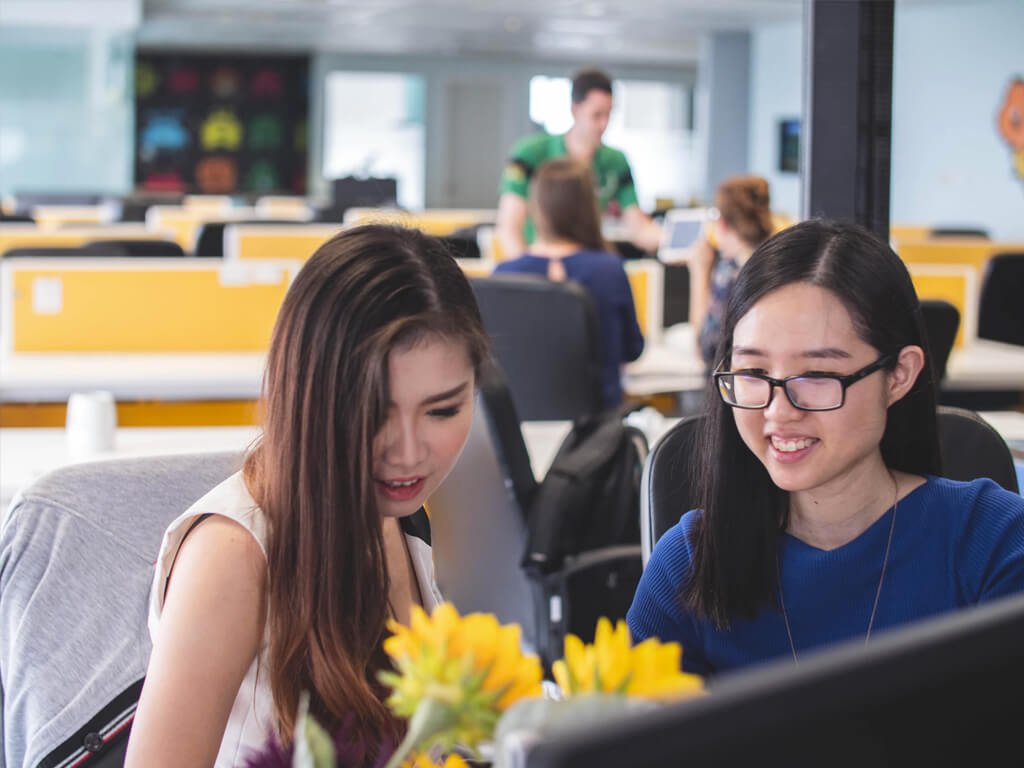